and dimming right one

I thought the woman whose name I learned was Anna,  and who was sitting on the pushcart was just too trusting by not counting the money that I gave her for the items that I chose from among her “buraot” items, until she told me that her right eye can barely see while her left eye was totally useless. Her sight had been defective since she was a girl. While growing up, she was desperate and a loner because of her deficiency until she met her husband who took good care of her.

Anna and her husband had been selling junk items for more than five years. They would spread their items on a piece of tarpaulin as early as six in the morning along the old railroad track now covered with pavement as early as six in the morning, just when the vegetable wholesalers are packing up. An hour later they would transfer to the corner of the Sto. Cristo St. where I found her. With their four children in tow, her husband would leave her to clean their other “buraot” items in the railroad track.

She smilingly told me that she and her husband have been setting aside money for their children from the meager daily earnings. Just like most of the hardworking scavengers of Divisoria, they live on the pushcart…or rather, beside their pushcart that are heaped with their junks at the end of the day. Their children are aged nine, seven, four and three years. Just before noon, she told me that they, already with lunch bought from a makeshift sidewalk eatery, would join her.

Our amiable conversation was cut short by a sudden and steady drizzle. I had to help Anna gather her items on their pushcart and cover them with two pieces of tarp that I brought with me, intended to be given to the vendors like her. We stayed on the covered sidewalk, and it was at this time that Anna got worried for her husband and children.  Not long afterward, a guy carrying two children, and two girls huffily came running and joined us.

As the pushcart was securely covered, I invited Anna and her family to the Jollibee outlet a few steps away. The eldest girl jumped and gleefully shouted when she heard the name. When we entered, other customers threw us inquisitive stares as the husband of Anna and the kids were dripping wet. It was their first time to enter the establishment and even taste its cheapest Yummy sandwich, but for such a happy occasion, I ordered the regular burger and spaghetti for each of them. While they were enjoying their sandwich, spaghetti, and Coke, they strike a picture of a happy family…of contentment, a far cry from many families that are virtually swimming in affluence, yet, not satisfied a bit. As a practice, I did not take their picture while enjoying their Jollibee meal, for I do not want the photo opportunity to come out as one done in exchange for something. So as not to instigate Anna and her husband to ask questions about me, I stopped asking more questions about their life….that way, I was happy not to be asked for my name, though, before we parted ways, I told them that the snacks were courtesy of a certain “Perla”. I was resolved, however, to see them again. 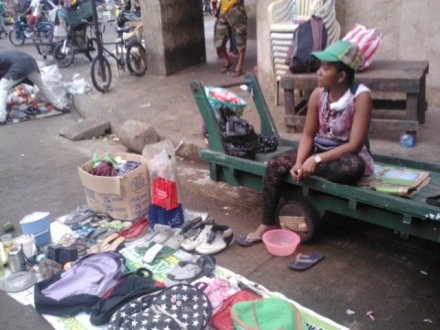 Sharing Need Not Be a “Big Time” Effort

I ask from friends and collect myself, what others consider as “trash” – empty rice bags, used shopping plastic bags, brown paper bags, net bags, used tarpaulins, empty jars, lengths of straw rope, etc. – to be distributed among my friends who sell recyclable junks and vegetables by the pile on sidewalks. They are called “buraot” vendors and the “buraot” refers to the junks and wilting vegetables that they sell. Some of them keep the brown paper bags to be used by their children as book covers, and the sturdy plastic grocery bags as “school bags”. On the other hand, the rice bags have many uses, one of which is safekeeping of things in the absence of decent bags that are sold in department stores.

It takes me about two weeks to be able to collect a sizeable volume of these various “treasures”, classify the plastic bags according to size, carefully fold them and finally apportion them together with the rest of the items among the pre-identified recipients for easy distribution. I am most glad if I am able to collect big plastic cover of refs and washing machines because they can be used as extended roof for “kariton (pushcart) home” of my friends. I taught them to fold big plastic bags in such a way that they can be used as “rain coat”. I used to do that when I was in elementary during which I would scavenge the garbage dump of a bakery in our town for recyclable junks especially plastic bags.

One time, a friend in California, “Perla” sent plenty of blue tarps that went straight to sidewalk and “kariton” dwellers. But I told her to stop sending such kind of item because I met a couple who sell “tinseled” bags of condiments that when spread by slicing open the two sides can serve the purpose of a mat, as well as, protection against the rain – for just Php20.00 apiece.

Every time I come home from shopping, I see to it that the bags, both made of plastic and brown paper are properly folded and set aside instead of tossing them into the garbage basket. The brown bag can also be used in keeping extra portions of vegetables before storing them in the ref. Also, I am not ashamed in picking up lengths of straw ropes from the ground while shopping in outdoor shopping areas such as Baclaran and Quiapo, as they are also needed by my friends in tying things that they always bring along with them. As a recycling advocate, I had been doing this for more than thirty years now.

Every time I hit the road for my random acts of sharing my backpack is full of these “treasures”, aside from Skyflakes crackers and home-cooked pudding for sharing. I just want to show that sharing blessings need not be a “big time” effort that involves a lot of money. If I can do it, I am sure others can do it, too. Those interested to do the same can start with the plastic bags that can be collected and given to their favorite vendor in the market….by doing so, we also help Mother Nature as the plastic bags that we recycle are prevented from clogging esteros or canals. 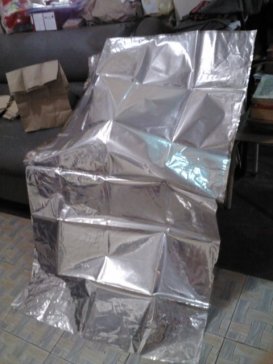