From the Far Sarangani Province

Regular visitors of Isetan Mall along Recto refer to Rowena Soliano as the “girl in black”, although friends call her “Weng”. She hails from Sarangani Province in southern Mindanao. She’s got an exotic face and always chick in her tight-fitting black outfit, that make her stand out in a crowd of shoppers in the mall while delivering ordered snacks to patronizing employees. She also loves to braid her hair in various ways every day that adds to her being a stunning looker. She has been working with a coffee shop located on the fourth floor of the mall where the videoke area is located.

In 2013, she fell in love with a persistent suitor whom she thought was serious in his intention. Unfortunately, their relationship got sour and realizing that something was seriously wrong with their relationship, she broke up with him despite her being pregnant during the time. She went on with her job at the mall, but went home when she was about to deliver her baby. After a year in Sarangani, she went back to Manila and implored her employer to take her back. She left her baby girl, now almost two years old in the care of her mother, to whom she regularly sends money.

Her job at the coffee shop starts at 10AM when the mall opens until its closure at 9PM. She seldom finds time to sit down, as just when she arrives at their stall after a delivery, another set or more of ordered snacks are waiting to be delivered again.  Despite her hectic schedule, her smile never leaves her face. The only break she gets is when she had to take a late lunch – standing. Another short respite is for a stolen moment for light and late dinner, still taken standing.

She is fortunate to have found a kind employer, a reason enough for her to love her job. It was her first job when she arrived in Manila from Sarangani Province. When I had a lengthy talk with her, I told her about the international resort that Manny Pacquiao is putting up in Sarangani. She told me that she was also told about it by her mother. However, she has apprehensions if she could be given the chance to land a job in such big resort due to her insufficient educational attainment. She told me that she barely finished her high school. She is also aware that there are plenty of four-year course graduates in their province and in the field of tourism, yet.

Weng is the opitome of the struggling youth from the province who try their luck in the bustling city of Manila, some of whom are unfortunate to have ended as prostitutes that ply their trade along Avenida. Some became exotic dancers in discreet beerhouses in Recto, Caloocan, and Cubao. Like their elder contemporaries who brought with them their families and ended living on sidewalks while surviving on recyclable junks collected from garbage dumps, the youth from the provinces of Mindanao are left with no choice but take the risk of uncertainties in Manila, rather than be recruited by the New People’s Army (NPA) and Abu Sayyaf.

Sarangani, the province of Weng,  is already infiltrated with NPA and drug dealers. The tentacles of Abu Sayyaf which is notoriously known for its kidnap-for-ransom activities have also been wriggling around the area for a long time, too. Worst, job opportunities in Sarangani is like the proverbial needle in a haystack. These are available at General Santos City, the nearest urban area, but for hopefuls like Weng, no opportunity is left, considering the thousands of graduates from several colleges and universities around the southern Mindanao area every year.

How can we then blame provincials like Weng for coming to Manila and add up to the already teeming population of the city? Yet, those who have not experienced distressing life in the province just cannot restrain themselves from uttering hurting invectives.   And, practically adding salt to the wound, are the incessant and oft-repeated arrogant declarations of the president about jobs and progress that the country and the Filipinos are enjoying!…and, under his administration, yet!…but the big question is, where are they? 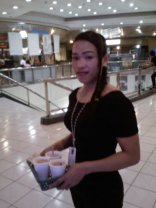 with his comment “KINABUHI” to an earlier blog about NDTC.

(Hiligaynon and English and versions)

Fast, if the terrain tilts or slopes

But not easing a bit its resolute force.

Man, a mere dot in the universe

Some are thorny, some yet, are stony

With dark corners, foreboding and dreary!