The Barangay Griῆo of Tacurong

The Barangay Griῆo was formerly known as Gansing that lies at the boundary shared with the town of Lambayong, formerly, the gateway of settlers from Visayas who settled first in what is now known as New Passi before spreading out to other parts of the once sparsely populated areas that include Tantangan, highlands of Magon and Tacub, and the lowlands of Tacurong. The area was thickly covered with talahib, talisay, cogon and “enyam” (bignay}. Among the pioneer families that settled in the area is the Griῆo, whose patriarch was the late Dr. Manuel J. Griῆo. As he found the land promising, he invited friends in Iloilo to join him. Soon, others who came from Negros also came. Accordingly, the first classes were held in a “bodega” (warehouse) of the Griῆo family where about 50 pupils were taught, and one of the teachers was Ernestina Davala-Alvarez.

Today, Griῆo is a flourishing barangay with the expanse of fertile land shared by rice fields and African palm plantations. Observably, the barangay has a well-maintained system of irrigation canals that provide sustenance to the plantations. It is also among the barangays of Tacurong where Christians live peacefully with Muslims.

The barangay has two Catholic chapels, the Immaculate Conception (main) and San Isidro Labrador, both situated along the highway. According to one of the lay Catholic leaders, the parish priest of the Our Lady of the Candles of Tacurong officiates the Mass during the first and last Sundays of the month. The two Muslim communities have their own respective mosque.

The barangay has an elementary school, the Dr. Manuel J. Griῆo Memorial Central School and a high school, the Virginia F. Griῆo Memorial National High School which has facilities for the senior students of the K-12 educational program of the government. The most popular courses of the senior high school are electronics, welding, cookery, masonry, and hotel housekeeping.

When I went around the barangay, I was fortunate to have been driven on his tricycle by Fernando Gulac, the CVO Unit Commander of Barangay Griῆo whose chairman is Romeo Panes. 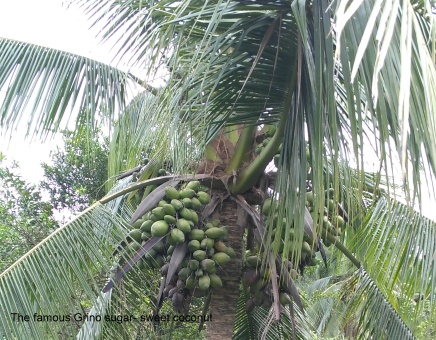