The “STATEMENT” in Today’s World

The “statement” in today’s world is an effort of a person to make him/her unique, a standout in a crowd…but the end motive is to be satisfied…and nobody should question that. For as long as the person who makes a “statement” does not hurt anybody, he/she should be left alone. A STATEMENT CAN SPELL HAPPINESS.

On the other hand, these guys are considered trendsetters that make the world consistently on the go and dynamic, instead of stagnating in a pool of monotony. Without uttering a world, they make manufacturers of goods realize what are needed by a certain segment of consumers….great for economy. They are also great advocates of recycling as most of what they wear are pre-loved outfit, albeit, originals and worn by well-known personalities….garments that somehow found their way to ukay-ukay outlets….great for the environment.

These guys should also be admired for their courage to be different. Imagine a 70-year old lady wearing a mini-skirt as her intention is to move around comfortably, never mind the pair of legs. Imagine, too, the courage of a macho body builder who wears pink gym shirt, as by wearing such color, he helps calm down the snooty people around him. And, imagine, too, a 4-foot woman with a big bag slung over her shoulder…her shoulder bag that contains a small make-up kit, a piece of Skyflakes cracker, and a bottle of mineral water.

If we want harmony, we should try to be tolerant and appreciative of things that others are doing but we failed to do. If being amused can make our day…then, let it be that way.

LET US MAKE OTHERS HAPPY BY LEAVING THEM ALONE…AND, THE WORLD WILL BE SHROUDED WITH HARMONY!

Once mined, a particular parcel of land can never recover lost yields – minerals in various forms that sustain life and top soil that enforce the earth’s crust. And, that is what is happening to the archipelagic Philippines which is being eaten up by the industry. Today, the tumultuous political atmosphere of the country is further jittered by the decision of the Department of Environment and Natural Resources (DENR) to cancel the permit of many mining firms, a decision which is not to the delight of some sectors, especially, those that have been directly and financially affected due to their stakes. A big howl also comes from the purported human rights advocates who use loss of job as their tool for protest, as if only mining offers the opportunity to earn and nothing else.

The root cause of the swarming of mining ventures in the country, mostly foreign-based, is the Philippine Mining Act of 1995 which was authored by Gloria Macapagal-Arroyo when she was yet, a senator. It allowed foreigners to have a 100% ownership of land areas that they have claimed for mining. The blanket authority eventually paved the way towards the virgin mountains and forests of the country for any foreigner who was willing to invest in mining ventures. Rainforests were cleared, hills and agricultural lands were excavated, and chemicals polluted rivers, streams that flowed to the estuaries and coastal waters…and farmers lost their farms. At the rate abuse of the country’s natural resources are going, this law needs to be revoked.

During the presidential incumbency of Benigno Aquino III, the issuance of mining permits multiplied which enriched even local government officials. Although, some of the farmers were employed by the mining firms, their pay was meager compared to the former yields of their farm. The mushrooming of temporary mining communities resulted to the proliferation of crimes and prostitutions that literally eroded the values of the once sedate villagers and scandalized their once laid back way of life. The polluted air and water brought about diseases that emaciated the once healthy locals and the prices of basic commodities, especially, food, soared. Practically, the industry that has been hoped to bring progress, instead, devastated communities and their inhabitants.

Although, the financial effect to the country’s economy by the move to stop the mining operation can be recovered from other ventures, the recovery from its effects to the people and community could definitely be felt for a long time, as it involves cleansing of the polluted soil, the water beneath it and what flows on the surface. The government would definitely be helpless, in fact, more helpless, as shown by its inutile effort in tackling other problems that pester the country. This unfortunate fact leaves Mother Nature to do some kind of a self-healing. The eroded moral values and culture of the people may take generations to recoup. On the other hand, those who have been physically suffering and wasting due to the onset of diseases could just gasp for short breaths of the polluted air while holding on to their dear life!

At the outset, even without mentioning figures to show its devastation, the effects of the ABUSED OPPORTUNITY in mining the natural resources of the Philippines are very obvious. However, if the government decides to put a stop to it to give Mother Nature some respite, it must have READY FALLBACK PROGRAMS, NOT JUST PLANS for the displaced miners, considering that this problem has been plaguing the country for decades. Farming and fishing in the same devastated areas is out of the question because of the polluted land, rivers and coastal waters.

The most realistic move is to relocate the affected people to ANY RURAL AREA of their own choice, an option which means reasonable and realistic compensation. However, this problem could be aggravated if the concerned mining firms would also ask for compensation due to the cessation of their highly-financed operation….a suggestion is to use the confiscated money from drug operations.

The mining industry in the Philippines is proof that progress has a dear price. It glaringly shows that any venture that has got to do with Nature’s exploitation can be devastating…even with promises of proper management, as there is an innate tendency of man to deviate from the proper course due to greed! 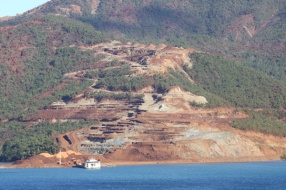