Locusts (apan in Bisaya; balang in Tagalog) contain a high level of chemicals known as phytosterols that could control heart-related diseases. The chemicals block the absorption of cholesterol, a chemical which increases one’s risk of getting cardiovascular diseases. This exotic delicacy is also loaded with fatty acids, minerals that boost immunity, fights cancer and prevent the onset of inflammation in body organs, aside from protein.

These insects are patiently caught in the evening during which they rest on the ground. The gatherers use flashlight to light their way around, practically, picking up the sleeping locusts from grassy fields.

The first step in cooking is by killing them through suffocation in sacks after which they are cooked in tamarind leaves enhanced with a little vinegar, after which they are sun-dried. When they are thoroughly dry, deep-frying follows which takes from forty minutes to an hour, to ensure crispiness.

The locusts thrive on leaves. Woe then, to bamboo groves, trees, rice and corn fields that they spot along their path as they darken the sky with their vast number. Interestingly, the locust is mentioned in the Bible as part of the diet of the Chosen People.

A small plastic pack of deep-fried locusts costs Php20 in the public market when it is in season. In southern and central Mindanao, the sources of this exotic delicacy are Polomolok, General Santos and Isulan. 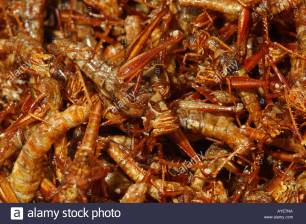