…the day democracy died in the Philippines

Indeed, September 21 gained prominence in the history of the Philippines as the day democracy died because of the Martial Law declared by the late Ferdinand Marcos. Among the reasons cited for signing the declaration were insurgency, Communism, corruption in the government…all of which were deterrent to the advancement of the country’s economy. After the declaration, the Marcos government became a beehive of activities founded on “Bagong Lipunan” or New Society.

Slogans and songs were composed, projects were implemented, infrastructures to support various industries, particularly tourism, mushroomed. In addition to those, permits for logging and mining were issued to hasten the exploit of the natural resources, purportedly to give additional support to the quest of the dictator to put the country ahead of the rest of the Southeast Asian nations. Marcos succeeded as he gained prominence and looked up to with awe and admiration by the rest of ASEAN nations. He inspired Lee Kwan Yew to transform Singapore into what it is today.

Along with the so-called progress, military and police abuse also gained prominence resulting to the incessant rallies. The notoriety of “METROCOM” was the talk of the town, as well as, the disappearance of prominent student leaders. Political personages who belonged to the opposition were dragged out of session halls and their homes to be locked up, including Benigno S. Aquino.

What has the country gained? Obviously, Manila became the cultural center of Asia, what with the springing up of the Cultural Center Complex along Roxas Boulevard that included, The Cultural Center of the Philippines, Folk Arts Theater, Philippine International Convention Center, the former Philippine Plaza Hotel (today, Sofitel), the cluster of squat buildings for agro-industrial exhibit and shows. Marcos became the new “tiger of Asia”. The Philippines soared as the new leader of Southeast Asian nations. Thankfully, there was no suppression of religion. The illegal drug “industry” was somewhat controlled with the execution of a Chinese drug lord in Rizal Park.

On the other hand, the Marcos take-over and control of various corporations was overwhelming. The act was decently dubbed “sequestration” to give it a legal impression….nothing personal. But the book written by Jovito R. Salonga, “Presidential Plunder…The Quest for the Marcos Ill-Gotten Wealth”, tells all about the staggering number of sequestered corporations controlled by the family and their allies. The book also tells how money is transferred from Manila to the banks in America for spending during their trips, as well as, the acquired properties in the land of Uncle Sam. The author was the first Commissioner of the Philippine Commission on Good Government, a misnomer, as the agency was supposed to concentrate on the ill-gotten wealth and not the issues on good governance.

During the time of their prominence, Imelda was quoted, “WE PRACTICALLY OWN EVERYTHING IN THE PHILIPPINES, FROM ELECTRICITY, TELECOMMUNICATIONS, AIRLINE, BANKING, BEER AND TOBACCO, NEWSPAPER PUBLISHING, TELEVISION STATIONS, SHIPPING, OIL AND MINING, HOTELS AND BEACH RESORTS, DOWN TO COCONUT MILLING, SMALL FARMS, REAL ESTATE AND INSURANCE”. This is the caption in the photo showing Imelda and Ferdinand Marcos in the same aforementioned book written by Salonga.

But the big question now is…HAD IT NOT BEEN FOR THE MARCOSES, WOULD THERE BE CULTURAL CENTER COMPLEX, PHILIPPINE HEART CENTER, PHILIPPINE KIDNEY CENTER, THE BETTER LRT (COMPARED TO THE NEW ONE), EXPANSION OF THE PHILIPPINE GENERAL HOSPITAL, ETC, AT THE RATE PLUNDERING IN THE GOVERNMENT IS GOING?

Finally, my advice as a mere “chirp in the wilderness” to President Duterte, is to tone down his praises to the Marcoses as the more praises he utter, the more supporters he losses. It is enough that he has let the whole world know that his family owes a lot to the Marcoses…with such pronouncement, he has already shown his gratitude more than enough. 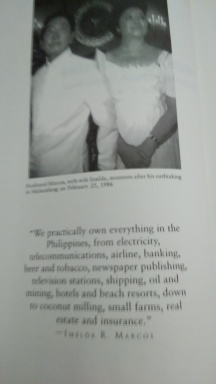