Despite her advancing age, beauty could still be discerned on her calm face. After more than fifty years, not only was I fortunate to meet her but had an intimate conversation with her at close range after a hearty breakfast hosted by Nita and Nito Bernardo at their home, and to whom I am so gratified for such opportunity. It was my first time to hear her speak with the typical melodious Visayan tone and delicate voice.

Her family used to live in New Iloilo, a sitio of Tantangan which was then part of Tacurong. Today, it is occupied by Jaime, a younger brother, and his second family.  The late mayor of Tacurong,  Jose Escribano was always around when there were affairs in Tantangan. During the time, Flor, who at 19 was a student and about to finish a course in education. It was during one of the occasions in Tantangan that the mayor could have noticed the pretty Flor who was always invited during public occasions. While she was studying in Cotabato city, a bodyguard of Escribano discreetly followd her to make sure that no guy would attempt to court her. The mayor also resorted to “courtin” Flor’s mother and enticed her to put up a business in Tacurong. She was a dressmaker in New Iloilo, then and her husband was managing the logging company of a rich relative in Parang, but on a meager wage.

A building was put up then in Tacurong with the ground floor occupied by the Dainty Refreshment which Flor’s parents managed and the second floor was allotted for the whole family. The establishment became famous for its halo-halo and cake which competed with those of the Angelita’s. And, to ensure that it would earn much as expected, the bus terminal was relocated in the vicinity, from its former location in front of the Tacurong Pilot School. For 24 hours, the Dainty Refreshment was open and that was how the de la Rosa family was able to earn substantially.

The late mayor had the reputation of getting what he wanted by all means, but not in the case of Flor, for it took him 4 long years to finally get what he wanted. Courting went as far as Manila where Flor continued her studies. When she finally graduated, she taught at the New Iloilo Elementary School, moving on to Tantangan, and when the Dainty Refreshment was opened, she was transferred to Tacurong with the instigation of the late mayor. The principal then of the Tacurong Pilot School was Mr. Abadilla and the District Supervisor was Mr. Llavore. At the Tacurong Pilot School she taught Science and Pilipino subjects. Out of gratitude, Escribano built a building that was later used by the Home Economics pupils.

Flor confided that due to emotional pressure, she resigned from her job and went to Manila, although, she feared for the safety of her family who might earn the ire of the late mayor. But as she could not stop him from courting her, she finally softened a bit and accepted her fate…finally, going back to Tacurong to be with her family. While in Tacurong, she would occasionally show herself up in public to assist the mayor during special occasions. That was how she got to be known as the “mayor’s secretary”.

When she went back to Manila again, she finally told Escribano once and for all, that she wanted to end their affair and threatened to enter the convent if he won’t concede. It was at this juncture that she saw the good side of the brusque mayor…who begged her not to proceed with her plan, but for them to maintain a platonic relationship. She agreed and the arrangement encouraged her to be with her family in Tacurong again to help manage the Dainty Refreshements, the earnings from which practically sent her siblings to school.

During one of her trips to Manila, she met Gregorio Aragona but who used the family name, “Soncuya”. They eventually got married and settled in his hometown, Sara (Iloilo). At one time, her sister, Bernardita who was living in the United States, had a need for a trusted caretaker of her child. Flor viewed it as an opportunity to visit the United States, so she asked Bernardita to let her do the job. In no time, she flew to the States as a tourist and took care of her niece. When she was no longer needed to take for her niece, she took jobs discreetly as she had no legal papers. For 18 years of her stay in the United States, her status did not change as she declined to bite the options to become an American citizen, beside her passport indicated her status as “married”.

Meanwhile, her husband took in a lover which came to the attention of Flor only much later. What triggered their separation was the reply of her husband to one of her queries if he had been missing her to which he replied, “please come home and bring the bacon”. Such blatant reply immediately made Flor decide not to go home, as she felt that her husband was just after her earned dollars. Despite her decision, she could not hold herself from sending money to him when he got sick.

In year 2000, she went back to the Philippines but dropped by Iloilo to visit relatives and also surprised her late husband’s lover. As she did not harbor any hatred in her heart, she even gave the widowed lover of her husband, three thousand pesos…her gift to their two children. She then, proceeded to New Iloilo in South Cotabato to be with her mother. But not long after, she decided to buy a house in Tacurong City where she now lives with a trusted aide.

While in the city, she faithfully attended the early morning Mass every day. Later, she was enticed to join the Marian Movement of Priests (MMP) which prays the Holy Rosary after the Mass. She was in the middle of this hectic devotion when she met a friend who introduced her to another spiritual passion, and this time, as a member of the Servants of the Holy Trinity, a healing ministry and prayer group whose main base is in Negros Occidental. She joined her friends, Lina Lacanafrancia and Margie Calansag during their pilgrimage to the movement’s base on what the pilgrims consider as the “holy mountain” of Escalante where a “prayer house” is located, and where an image of the Holy Child Jesus in enshrined. She was also brought to the “holy mountain” of Calinog to visit another shrine. From then on, her small group would make an almost monthly visit to Escalante, while that for Calinog, they do during the Holy Week. The two shrines have become beneficiaries of her benevolence, as with the shrine of Our Lady of the Holy Candle in Tacurong.

Ms. de la Rosa is the eldest in the family raised by hardworking couple, Salvador and Fe. Her siblings are Elsie, Salvador, Jr., Manuel, Rodolfo, Aurea, Bernardita, Corazon, Jaime, Ricardo, and Lorena. Their grandfather on their mother side had a German blood, while their grandmother had Chinese. On their father side, their grandfather was an Ilocano who married a mestiza, and who belongs to the Navarro clan.

She has no regrets for not having a child of her own, for she presumes that her being in such situation prepared her for motherly missions – for her family and other people. Before we parted our ways, she confided that during her high school days in Notre Dame of Marbel, she was often chosen to play the role of the Virgin Mary during Marian processions.

Up to the time that I was writing this blog, I could not believe that I had been talking to Ms. Flor de la Rosa and even kissed her check…..she, who was the misunderstood woman in my youth, although, with a celebrated status, and whose life today is devoted to Jesus and Mary. 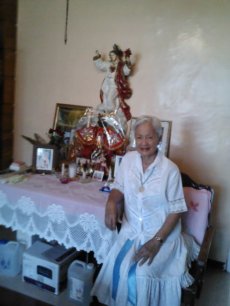 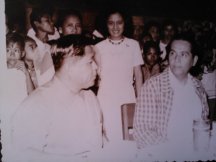